Firstly, apologies for the lack of blogging lately, I have been rather busy with an exciting development involving Mabel’s Five & Dime but more about that later.

I thought I would share with you some of the vintage shop signs that we have hanging in our home. Apart from Mr M’s collection of vintage movie posters & my love of old photographs, we don’t really seem to agree on art for our wall’s at home, so we have taken to filling the space with vintage shop advertising signs.

My personal favourite is a glass “Sausages” sign that come from Kennedy’s, the South London butchers & we have it hanging in our kitchen.

Kennedy’s butchers closed it’s doors on December 22, 2007 after more than 130 years in business & it feels nice to know that at least one of their shop signs lives on & is loved. We also have a “Kennedy” shop sign, but this is not actually up on the wall yet, to paraphrase Jaws “we’re gonna need a bigger house!”

We recently found this  wooden sign for “The Mighty Atom” Radio Crystal’s.

I believe it dates to the 1920/30’s when crystal radios were popular. They are the simplest type of radio receiver & can be made with a few inexpensive parts, hence their popularity post WWI.

Although someone thought to keep it all those years, it might not always have been loved. The back appears to have been used as a stand for paint pots!

The front has now had a good clean & it just needs a quick wax & buff before taking it’s place on the wall.

Next is a slightly unusual one, it probably dates to the 1950’s & is a 3ft wooden key advertising Barry Bros, key cutting service. Established in 1945, Barry Bros is still going today, the only one of our signs that are still in business.

When Mr M had to move from his original “Maddisons” shop in Knights Hill, which also happened to be an old butchers, he took the lovely old sign with him & got it put on his new premises –

But obviously the number 70 was no longer needed so we now have it hanging at home.

But I drew the line at having “Wilson Undertakers” up on the wall at home, so he had to sell it!!

As the title suggests, this blog is about some of my favourite girlie & sparkly things that I have acquired. Either found on jobs, Mr M has brought home for me to peruse or in the case of jewellery, items I have managed to “liberate” from his “to sort” stock – shhh don’t tell him!!

There is no label, so I don’t know who the manufacturer was but it is my go to party bag, it can glam up any outfit & adds that little touch of vintage charm.

If the diamante clutch is not quite right then I also have this gorgeous vintage 1950’s gold beaded clutch by French designer, Lucienne Offenthal. 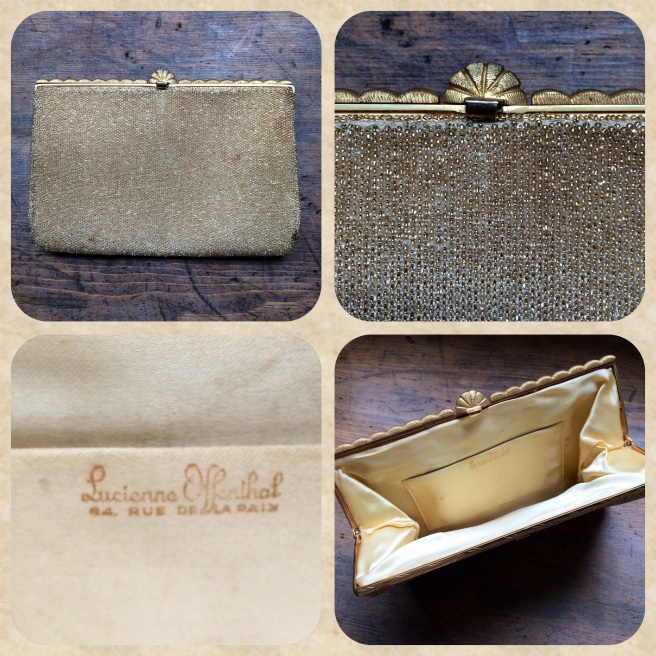 Both these bags are pretty dinky & can just about hold a iPhone, credit card & a lipstick, but then what more does a girl need!!

I am yet to use my next item, I absolutely love it & can’t bear to part with it. But being a statement piece, it’s a bit bigger than I usually wear & I have not found the right outfit to wear it with as yet.

This aquamarine, amber & diamante rhinestone choker was made by Sajen Dafri, who was making costume jewellery in Toronto, Canada in the 1940’s & 50’s.

Lastly is my favourite ring (well, technically 2nd favourite as my mum’s platinum & diamond bow engagement ring is my most prized possession but that did not come from a job)………. 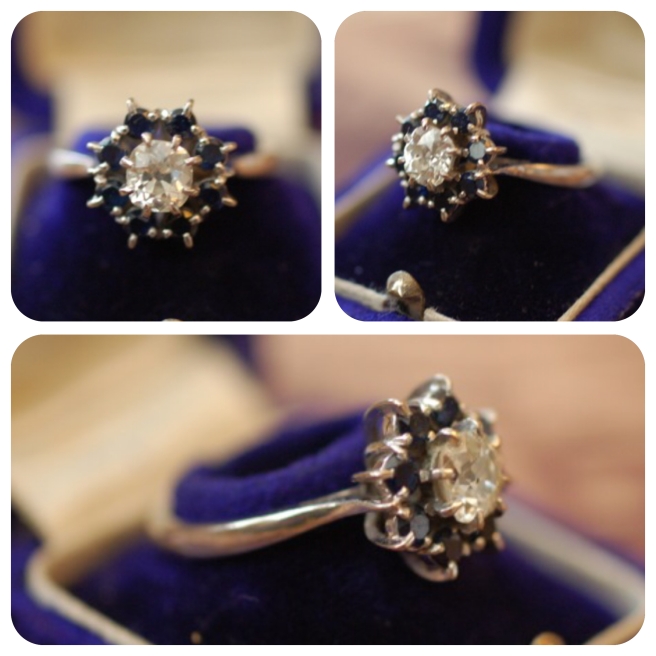 A diamond with sapphire’s set in 18ct white gold, this ring dates from between 1930’s – 50’s. I’m a sucker for the colour blue (see above choker!) maybe that has something to do with the three birthstones associated with my birthday in December: Tanzanite, Zircon, and Turquoise & every girl needs diamonds right?

One of the fun things about our work is all the weird & wonderful things we get to see. Some of them bring back lovely memories of a fabulous childhood growing up in the 70’s & 80’s, other just make you ask “what were they thinking” & why?? So I thought I would share with you 3 things that we found last week – First off taking pride off place on top of our Hall of Fame for random photographs we love is……

This photograph of Winston Churchill with the Thompson “Tommy” submachine gun was taken during a visit to Hartlepool in 1940. The photo was used by both the British & the German’s for propaganda purposes. The original photo has soldiers with Churchill but these were removed & the British used it to portray him as serious & meaning business. Where as the German’s compared it to American gangsters, using it in propaganda leaflets airdropped onto Britain. Next up is this rather kitsch vintage wall clock of a Jack Russell…….

now Mr M sent it home all dirty from a job thinking it would be funny, as we have Mabel the Jack Russell –

Little did he know that I would love it, clean it & know exactly where to put it!! 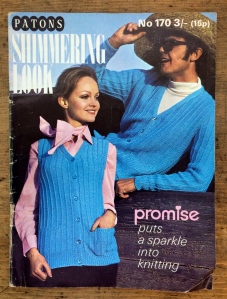 And you get all these breathtaking patterns & more in just one book!!!

I’d like to think it’s one vintage fashion look that may not come round again. Well I live in hope, I’ve done my share of funky knitwear….

Leisure Looks – One piece playsuit for the holiday scene. 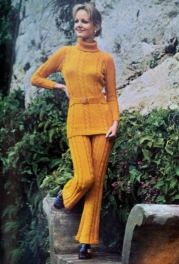 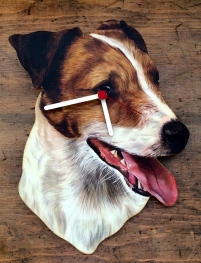 Vintage studio glamour photograph of a a woman in a swimsuit sitting on a basket weave chair, circa 1950/1960s

Antique studio photograph of an athlete sporting a great moustache! Written in pencil to the reverse “Hutchinson”, circa 1900/1910 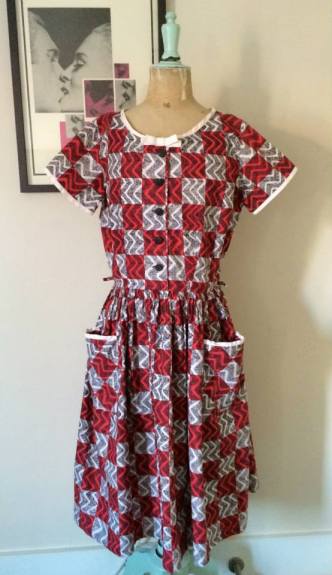